Inconel is a material that is precisely engineered for some of the hardest environments of usage to be found in production. When compared to stainless steel, Inconel has an extremely high temperature tolerance and does not lose as much tensile strength at 2,000 degrees F as other steel varieties.

However, Inconel is an expensive material, one which is best reserved for the right use conditions where other materials won’t work as well. Keeping this in mind, here is an overview of the properties of Inconel, as well as a few instances of applications where Inconel would be favored over most stainless steel formulations:

Inconel is preferably used in the oil and gas production industry owing to its high temperature tolerance and oxidation resistance properties. The oil and gas industries require super-alloy metals, such as Inconel, that can endure intense conditions and volatile, corrosive gases.

Inconel 625 superalloy is particularly useful for processing systems needed for the production of natural gas. Owing to the especially high thermal fatigue power and oxidation resistance of Inconel 625 Pipes, it is also used for the segregation of extracted fluids or for inline steel transfer pipes.

Compared to most stainless steel alloys, a basket manufactured of super alloys such as Inconel will not lose shape as easily when carrying parts in a rigorous heat treatment procedure.

Some manufacturing processes can combine high and low-temperature processes in rapid succession. Many Inconel alloys maintain outstanding oxidation tolerance at high and low temperatures, enabling a single basket made of Inconel to be used in procedures where temperatures range between near cryogenic lows and heat treatment highs.

Inconel Alloy 600 Pipes is often utilized in marine applications owing to its exceptional tolerance to sodium chloride (salt) at varying temperatures. Therefore, in the case of processes that use salt or factory locations along the coast, Inconel may be suitable for washing basket parts.

Some stainless steel alloys, however, also show outstanding tolerance to saltwater. So, when will Inconel be deemed to be preferable?

Generally speaking, this superalloy would actually be much more effective than grade 316 stainless steel if high temperatures of more than 1,000 degrees F were not of importance. Inconel can retain its oxidation tolerance at higher temperatures than 316 SS would.

Jet engines are exceptional in their ability to survive intense temperatures, both high and low, even during operation. As stated on the environment training website, at 36,000 feet. (Well within a passenger jet’s standard cruising altitude), the average air temperature is-56.3 degrees C (-69.3 degrees F), although the combustion cycle that reach temperatures of 1,150 degrees C (2120 degrees F).

Cooling techniques are used to quickly decrease temperatures, but they will also readily exceed the tolerances of certain metals. Inconel 600 maintains high oxidation tolerance and tensile strength despite frequent changes in temperature from the combustion cycle and cooling techniques utilized in the aerospace industry.

Inconel is the best material where the intense temperature and chemical tolerance are a must, because when the temperature is high, the oxidation tolerance of certain metals will usually be compromised.

5 Uses for Inconel and Why to Use it

by admin time to read: 2 min 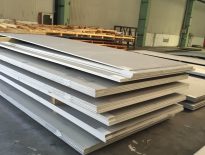